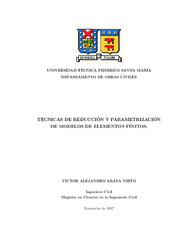 This thesis presents the development of an eective model reduction and parameterization techniqueto solve simulation problems based on analysis of high dimensional models, which involve ahigh computational cost. Some examples of these types of analysis include: uncertainty analysis, nite element models updating, reliability-based design, among others. The development of applicationand tools to improve the eciency of this process is fundamental.In previous research, progress has been made based on modal synthesis techniques in order toeciently solve the aforementioned problems. These techniques are based on the substructuringof the model with the reduction of the internal modes, also called xed - interface normal modes.In this work, the interface reduction based on the characteristic normal modes is considered in adeeper way. An interpolation scheme for approximating the interface mode is proposed in orderto improve the parameterization eciency. With this technique the computational cost is reducedwithout losing the quality of the results.Additionally, the eect of the residual normal modes is incorporated as a correction to the aforementionedreductions. The residual eects in addition with the interpolation scheme conform aecient methodology for the resolution of re-analysis based problems.The performance of these techniques is evaluated in several application examples, which correspondto linear and localized non-linear nite element models, under environmental actions modeledas stochastic processes. These models correspond to problems of high dimensionality due to thelarge number of degrees of freedom and parameters involved. On the other hand, the uncertaintyin the properties of the models is considered through the use of random elds, which provide arealistic modeling strategy of the behavior of the uncertainty in the structural systems.