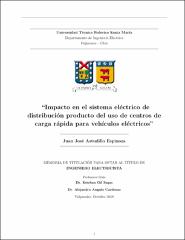 In the present study the impact caused to the electrical distribution system by the use of fast charging stations (FCS) for electric vehicles is analyzed. The impact is studied from three di erent approaches. First, energy is dimensioned and quanti es the demand pro le for the FCS in the Metropolitan region under di erent scenarios. Second, the load center prototypes used in the market are homologated with the harmonics standards of xed currents in the Chilean regulations. Finally, the tari s of regulated customers in high voltage are applied to a load pro le of one of the scenarios obtained. The problem arises as a result of the emergence of electric vehicles, technology that is entering the market and is booming. Faced with the uncertainty of users running out of charge in some remote place, the need arose to use load centers at intermediate points such that it is feasible to make trips of long distances, or eventualities of not having loaded the vehicle at night , or the battery status being soon to be discharged. With respect to the load pro le, a probabilistic model is necessary to emulate the demand resulting from the great randomness of the variables that in uence the problem. A mobility scenario needs to be de ned and a Monte Carlo model is applied to the eet of electric vehicles (EV), where the moment in which the need to recharge is determined. Only light and medium vehicles are studied, excluding heavy vehicles such as trucks and buses. Di erent study scenarios are established, through a sensitivity analysis to three speci c variables: EV penetration, percentage of users with slow charge option and distances covered by drivers. As a result, the demand per hour in a day expressed in terms of average and standard deviation is obtained. It is appreciated that the decrease of users with the option of slow charge has a greater e ect on the results than the increase of EV penetration. From the studied pro les it is obtained that the increase of load in the transformers that feed the distribution system when applying the maximum demand reaches values lower than 20% in the di erent scenarios and the daily energy does not surpass 5% of the energy demanded by the distribution system. Critical values are not reached. However, it must be taken into account since the analysis is limited only to light and medium vehicles. With respect to the level of harmonics injected by the FCS prototypes, the standards set in Chile are based on the IEEE standard 519-1992. Various equipment complies with the levels established in the quality of energy in Chile when operating at full power, being necessary a deeper study at the time of installation in such a way that ensures compliance with the injection of harmonics. There are equipment that comply with other regulations, which allow other levels of distortion, which requires a speci c analysis in greater detail. Finally, respect to regulated customer in high voltage, a demand pro le for an individual CCR is applied with the data obtained from one of the case studies (electric vehicle penetration of 20% and 70% of users with the option of slow charge at home). The costs obtained serve as a reference or starting point to measure the magnitude of the operation of the fast charging stations when demanding energy as regulated customers, however it is necessary to use more complex statistical tools to be able to determine with greater accuracy the value of these. The higher cost in all tariffs a ects the energy charge, being 70-80% of the total charge associated with each tari , followed by the power charge reaching values of 20 %. Note: Annex A contains the executive summary with a synthesis of the methodology and the main results of this study.