CLASSICAL STABILITY AND FORMATION OF BLACK HOLES BEYOND GENERAL RELATIVITY 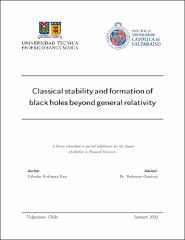 In this thesis, we will discuss the formation, classical stability, and an observational signature of black holes in the presence of additional degrees of freedom. Adding additional degrees of freedom though extra fundamental fields in the action seems to be the most promising way to construct theories of gravity beyond general relativity. Firstly, we present a numerical study of the gravitational collapse of k-essence model, in which a scalar field with a non-canonical kinetic term is added into the action. We will show that the scalar field propagates in the so-called emergent spacetime described by a metric different from the gravitational one, the effective metric. In this theory, two horizons emerge, known as the apparent and sonic horizon, related to the collapse of the gravitational and the effective metric, respectively. For numerical purposes, we will focus on a particular Lagrangian K(X) = X + βX2 , and study the formation and universal structure dynamics of the horizons at the threshold of the formation of these objects. However, the addition of scalar degrees of freedom is not the only alternative. Higher dimensions, supergravity and string theories naturally lead to additional scalar and vector fields in the action when we consider the low-energy limit of such theories. To construct viable theories of gravity with additional fundamental fields, a review of the stability of black holes must be a necessary task to ensure the absence of Ostrogradsky instability. In this sense, we study the classical stability of the generalized Einstein-Maxwell-Scalar theory. We will develop a perturbation formalism on a static and spherically symmetric background and show that black holes are generically stable under certain conditions. Finally, we will discuss a physical observable of black holes, namely the quasinormal modes for pure Lovelock black holes in some particular dimensions. It is well-known that the set of quasinormal modes frequencies depends on the intrinsic parameter of the black hole. We will analyze how the spacetime dimension affects the characteristic time and oscillation frequency of the ringdown signal, the final state of a perturbed black hole.