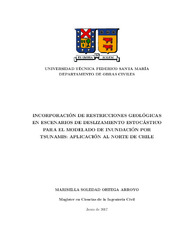 In this work a new methodology that incorporates the expected slip in northern Chile, based on the interseismic coupling shown by Métois et al. (2013), in the generation of stochasticslip is developed. The proposal of M´etois et al. (2013), which could generate scenarios of magnitudes between Mw 8.4 and Mw 8.9, is divided into three zones and works with the central segment located in front of the city of Iquique, which houses a magnitude Mw 8.4 event. Themethodology used for the generation of stochastic slip is based on the spectral representation of the slip heterogeneity, a method presented by Goda et al. (2014) and originally developed by Mai and Beroza (2002).In a first step, the new method is validated using the inverted finite-source solution ofHayes et al. (2014) for the April 1st, 2014 Mw 8.1 earthquake. The results are satisfactory andshow that the von K´arm´an correlation function obtains better solutions over the Gaussianand Exponential correlation functions in the generation of random slip fields.Once the new method has been validated, we proceed to work with the distribution ofinterseismic coupling, which is analyzed in the wave number domain, by adjusting a vonK´arm´an spectrum in the radial wave number, but with different autocorrelation lengths inthe along-strike and down-dip directions, thus obtaining the objective spectrum. In orderto maintain the spatial structure of the interseismic coupling distribution in the stochasticrealizations, a Phase Variation Method is developed, which consists in retaining the spectralphase and then introducing a normally distributed random noise multiplied by , where is aunique parameter that controls the variability in the distribution. We conclude that = /5generates the desired results.As an additional solution, this work investigates the effect on tsunami wave profiles on thecoast and tsunami heights on the ground of a hundred different stochastic slip realizationsgenerated. The results of virtual tide gauges are useful to reinforce concepts such as that thereis no need for a drop in sea level or exposure of the ocean floor for the occurrence of a tsunami,that the first wave is not always the most destructive and that the danger of a tsunami canlast several hours after the arrival of the first wave. Inundation depth results highlight astrong sensitivity of the tsunami wave heights onshore to the spatial characteristics of theslip, with a inundation uncertainty of up to 4 [m]. However, the methodology also allows identifying areas less sensitive to these variations.