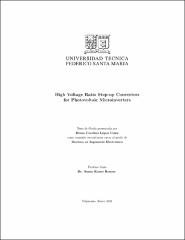 The use of fossil fuels, such as coal, oil and gas, has caused considerable climate degradation. This has made that clean energy sources play an important role in the world’s energy portfolio, where the photovoltaic (PV) technology has emerged as a reliable solution in the industrial and small scale applications. Photovoltaic microinverters are being increasingly used in small-scale PV applications, particularly in houses, buildings and commercial facilities, where occur some obstructions due to different orientations of the structures, leaf, cloudy days, and close objects, which impact on the power generation of the panel. Moreover, this is, probably, one of the most competitive PV market segments where tens of companies develop and manufacture microinverters. The main advantage of the PV microinverter configuration is that the tracking of the maximum power point is individual for each PV panel, reducing the partial shading, module mismatch and the impact of the orientation. Nevertheless, the efficiency is lower compared to other PV configurations due to a high voltage effort is necessary to connect a PV module into the grid, which is usually achieved by two-stage converter. A high frequency isolated DC-DC converter followed by an unfolding inverter is one of the most used concepts in the market. On the other hand, during the last year, the single-stage topologies have been proposed in the literature, since only one power conversion stage is required to extract the maximum power of the PV module and inject the AC power into the grid, which could improve the efficiency of PV microinverter configuration. But, the main challenge of these topologies is their control because all variables of the converter are composed by AC waveform and DC-bias. Therefore, the goal of this thesis is to analyze and develop three non-linear control strategies to regulate the single-stage topologies and evaluate the best alternative. These strategies are Finite Control Set-Model Predictive Control, flatness-based control and sliding mode control, which have been validated through simulations for a typical single-stage topology with differential connection. Based on the three non-linear control methods analysis, it will be selected one of them to validate through experimental tests. Keywords: photovoltaic energy, PV microinverters, single-stage topologies, Finite Control Set-Model Predictive Control, flatness-based control, sliding mode control