THE LEPTOQUARK HUNTER'S GUIDE AND THE DARK VECTOR DOUBLET MODEL 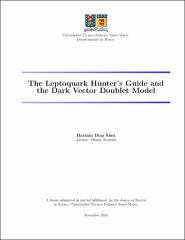 The purpose of the first work is to point out that a model-independent search strategy coveringall possible leptoquarks is possible and has not yet been fully exploited. To be systematicwe organize the possible leptoquark final states according to a leptoquark matrix with entriescorresponding to nine experimentally distinguishable leptoquark decays: any of {light-jet, b-jet,top} with any of {neutrino, e/µ, }. The nine possibilities can be explored in a largely modelindependentfashion with pair-production of leptoquarks at the LHC. We review the status ofexperimental searches for the nine components of the leptoquark matrix, pointing out which threehave not been adequately covered. To demonstrate the utility of the leptoquark matrix approachwe collect and summarize searches with the same final states as leptoquark pair production anduse them to derive bounds on a complete set of Minimal Leptoquark models which span allpossible flavor and gauge representations for scalar and vector leptoquarksIn the second work of this thesis, we explore an extension to the Standard Model whichincorporates a vector field in the fundamental representation of SU(2)L as the only non-standarddegree of freedom. This kind of field may appear in different scenarios such as Compositeness,Gauge-Higgs unification and extradimensional scenarios. We study the model in which a Z2symmetry is manifiest, making the neutral CP-even component of the new vector field a vectorialdark matter candidate. We constraint the parameter space through LEP and LHC data, as wellas from current dark matter searches. We find that the model is highly constrained but a smallregion of the parameter space can provide a viable DM candidate. Additionally we contrast ourpredictions on mono-Z, mono-jet and mono-Higgs production with the ones obtained in the wellstudiedinert Two Higgs Doublet Model. Finally, comment on the implications of perturbativeunitarity are presented.