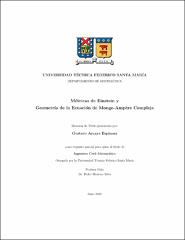 The field equations of general relativity are a topic of interest for understanding gravitational in teractions as a geometrical phenomenon of space-time. A particular case, known as field equations on the void give place to a proportionality condition between curvature and metric over a manifold, called the Einstein condition. This thesis adresses the topic of existence of K¨ahler metrics which satisfy the Einstein condition and some of its consequences. The proportionality condition consists of a cohomology equality, which can be used to deduce a non-linear partial differential equation of the Monge-Amp`ere type. Several very important results were accomplished during the second half of last century, specially by Yau and Aubin for negative and vanishing curvature. Also Yau, conjectured that there was an obstacle concerning stability when curvature defines a positive cohomology 2-form, known as first Chern class. This was specified recently by Tian, who proved, in parallel to Chen, Donaldson and Sun the existence of K¨ahler Einstein metrics when this stability condition is met. On the next 3 chapters the discussion is focused first in Elementary theory of Complex and Rieman nian Geometry, which are most important for understanding K¨ahler Geometry. Later, the topics H¨older Spaces and Schauder theory are addressed with the objective of providing a priori estimates for differential equation’s solutions. Finally, a simplified proof of Yau’s theorem (for negative and vanishing first Chern class) is given my means of the continuity method together with a proper Im plicit Function Theorem formulation, and a priori Schauder estimates. The conclusion of this thesis consists of the presentation of the obstacles that make the technique described previously to prove the existence of K¨ahler-Einstein metrics on K¨ahler manifolds with positive first Chern class. Finally, the last chapter of this thesis is devoted to some classical and important application of the previous results. More precisely, we present a detailed account on the proof of Bomologov Miyaoka-Yau inequality for K¨ahler-Einstein manifolds, which gives strong constraints on the Chern classes (and hence, on the topology) of these manifolds. We then address the Beauville-Bogomolov decomposition theorem for flat manifolds, which tell us (roughly speaking) that the building blocks of such manifolds are complex tori, Calabi-Yau manifolds and HyperK¨ahler manifolds. Finally, we show that Yau theorem together with classical results from Riemannian geometry implies that all Fano manifolds are simply connected.