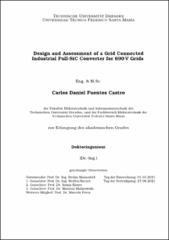 Wide bandgap (WBG) power semiconductors have drawn steadily increasing in terest in power electronics in the last three decades. These devices have shown the potential of replacing silicon as the default semiconductor solution for sev eral applications in determined power and frequency ranges. Among them, the most mature WBG semiconductor material is silicon carbide (SiC), which presents several characteristics at the crystal level that translate in the potential of pre senting lower resistivity, be able to switch faster with lower switching loss, and present both higher characteristics to tolerate and dissipate heat when com pared with silicon. However, the same characteristics that make it great also present a different set of drawbacks to be considered, which aligned with its increased cost make it challenging to assess if its advantages are justified for a particular application. Applications that highly value efficiency and/or power density are the most benefited, and converter solutions featuring the technology have already breached into these application markets. However in other applica tions, the line from which silicon carbide starts making sense in the cost/ben efits/drawbacks balance is not clear. This is typically the case of industrial ap plications, which were the main focus and motivation of this work. Hence, in this work the main goal has been to determine the basic characteris tics, advantages and limitations that SiC technology designs for industrial low voltage high power grid connected converters present. To that end, a 690 V, 240 kVA SiC-based grid-tied converter demonstrator following industrial design criteria has been developed. Then, based on this design procedure a theoretical comparison between a 690 V, 190 kVA SiC-based converter against a silicon based converter designed for the same power output has been performed to compare them regarding cost, efficiency, size and weight. This work also com prises a thorough revision of the state of art of SiC devices, which led to the selection of the switching device. Additionally, a characterization of both single and parallel-connected operation of the semiconductor modules was performed, to determine the module characteristics and its suitability to build the SiC con verter demonstrator. Results show that the converter demonstrator operates as designed, proving that is possible with the corresponding precautions to achieve: a low inductive power loop, balanced parallel connection of SiC modules, adequate driving cir cuits for the parallel-connected modules and an adequate filtering solution in compliance with grid-codes based on standard core materials for the selected switching frequency. Finally, the theoretical comparison between the two de signed power converters shows that, attained to the conditions of the compari son, the SiC converter solution presents efficiency gains over the whole operat ing range, while presenting substantial weight savings at 89% of the costs of the Si-IGBT design, presenting itself as the cost-effective solution for the presented application requirements under the given design constraints