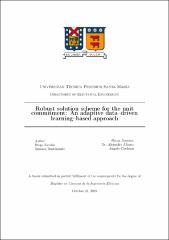 Robust optimization models of the unit commitment problem (RUC) have been widely used for the day–ahead calculation of power dispatches and reserves schedules under high penetration of renewable generation. Typically proposed uncertainty sets, as budget–based sets, control the level ofrobustness of the solutions by the selection of a certain set of parameters. However, the procedures for its calculation are often considered part of a preprocess, ignoring the possible benefits of the dynamic determination of it. In this work, a solution scheme for the RUC problem is proposed, using data–driven–based uncertainty sets, where robustness control parameters are dynamically calculated as a function of previous operation results. The determination of the adaptive robustness level is made using a reinforcement learning approach, resulting in a closed–loop data–driven framework. Besides, an experimental framework that simulates real–time operation is proposed and used to test the proposal. Out–of–sample experiments shown the effectiveness of the proposed scheme against well–known robust formulations with fixed robustness levels, by improving systematic indicators as operational costs, non–served energy, and renewable energy curtailment. Two systems of different scales are analyzed, showing the concept effectiveness and the scalability of the present proposal.