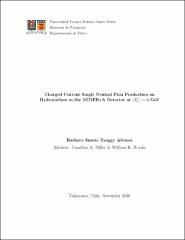 Quasi-elastic scattering is generally used to measure oscillation due to being the channel where final state interactions and energy reconstruction are best under stood. However, the most important background comes from pion resonances. The pion might not be observed due to final state interactions; this is particularly true for CC neutral pion production from the ∆ resonance. Here we present the state of the art neutral pion reconstruction used in the MINERvA experiment for the 2013-2019 dataset, called NuMI Medium Energy Beam, where most neutral pions are produced with kinetic energy between 0.015 - 2.0 GeV at hEνi ∼ 6 GeV. We encounter the sce nario where neutral pions are misidentified, and their reconstruction is a challenging task beset by low efficiency and resolution. To improve our reconstruction, a machine learning (ML) approach was used with exciting results (publication coming); this ap proach is aside from the analysis developed and presented in this thesis, but a short description is provided in appendix, see Appendix C. After reconstruction, signal se lection, and background studies, a differential cross-section calculation is delivered with unprecedented statistics. Differential cross sections for muon momentum, muon production angle, pion momentum, pion production angle, neutrino energy, and four momentum transfer square Q2 are reported and are compared to a GENIE-based simulation. The effects of pion final-state interactions on these cross-sections are investigated