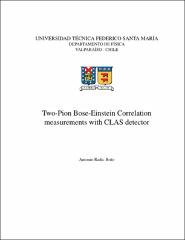 In this analysis, we studied Bose-Einstein correlations for positive pions produced in DIS events. The analysed data came from experiments carried out during the run period EG2 in Jefferson Lab, Virginia. Multiple nuclear targets exposed to a 5.014 GeV electron beam. The studied nuclear targets were D2, C, Fe and Pb. This phenomena has been studied in various types of scattering experiments such as pp, pp, πp, Kp, e +e −, heavy-ion collisions, DIS, among others, measuring different kind of bosons, such as pions, kaons and photons. The HERMES collaboration using nuclear targets from 1H to Xe found no significant variation among them. By comparing the pairs of π + to uncorrelated pairs, we can obtain information of the space-time structure and dynamics of the source of the produced bosons. The goal of the study was to measure the size of the π + production source and its degree of coherence in one and two-dimensional approaches. A correlation function was constructed for each target by the ratio of the distribution of π + pairs, coming from a single event to a distribution of uncorrelated pairs. The uncorrelated pairs were constructed using the size of the pion source along two perpendicular directions in order to measure a possible elongation of the source. Clear elongation was found for all nuclear targets with dependence in nuclear number A. Bigger elongation was found in light targets and it presented saturation for heavier targets, such as, Fe and Pb an event-mixing method that takes pions from two different events. The correlation function was corrected with a double ratio technique, using reconstructed events from simulations. By this way, biases from the experiment and analysis were removed from the correlation function. The corrected correlation function was fitted by a Goldhaber parametrization in order to measure parameters of interest r and λ, which represent the size of the pion source and its degree of coherence respectively. No significant differences were found, regarding the size of the source along solid targets. In the two-dimensional study, we obtained the parameters rt and rl . These represent