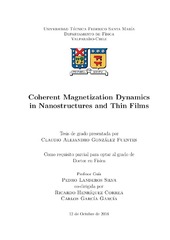 This thesis is a compendium of theoretical and experimental works on ferromagneticresonance (FMR) in uniformly magnetized nanostructures and thin lms.In the theoretical part, supervised by Dr. Pedro Landeros, a very general andcomprehensive model to nd the full set of equilibrium states and their stabilities underthe action of spin polarized currents is presented. This model allows to nd the regimeof steady-state oscillations of the magnetization and build complete phase diagramsMoreover, a general model of the detection of the ferromagnetic resonance innanostructures by the spin recti cation eect is presented, which accounts for theexcitation of FMR both by spin polarized currents and voltage controlled magneticanisotropy. The model is successful to explain many published results on this subject.In the experimental part, supervised by Drs. Carlos Garca and Ricardo Henrquez, anew methodology for a more precise determination of the spectroscopic g-factor in thin lms in FMR experiments, is presented. The results are promising in order to solve thegreat discrepancy in the values of g that can be found in the literature. FMR was alsoemployed for a study of the intensity of perpendicular magnetic anisotropy (PMA) inCoFeB/Pd multilayers. It was found that there is a critical thickness of Pd for which netPMA appears and that the intensity of the PMA increases with the number ofrepetitions. These results have been attributed to the continuity of the CoFeB/Pdinterface and to the varying PMA intensity as more interfaces are deposited.