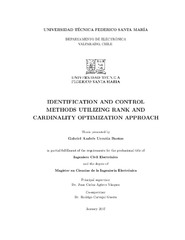 This Thesis addresses a class of optimization problems that can be found in severalareas, such as system identi cation and control. Particularly, these problems are formulatedby using rank and cardinality constraints in order to obtain low rank matrices orinduce sparsity of the solution.Rank-constrained optimization problems are found in control and system identi cation.Low-order controller design problems are well known examples where the formulationutilizes Linear Matrix Inequalities (LMIs) and rank constraints over matrices forbounding the controller's order and closed loop stability degree.Promotion of sparsity in identi cation and control problems can bring many practicaladvantages in the nal solution. In model selection, by formulating the identi cationproblem with a cardinality (`0-norm) constraint over the parameter vector, a simpli edor speci c structure of the model can be obtained. In control applications sparsity canbe induced on the solution of an optimal control problem, thus limiting the number ofactive actuators at each time step.Although low-rank and sparsity are desirable characteristics in the solution of manyproblems of interest, solving these type of problems poses computational diculties.Many approaches that rely on approximations and speci c tailored solutions are availablein the literature in order to overcome the inherent complexity of the problem. However, in this work a novel rank-constraint representation is used which, aims to solve (not anapproximation but) a problem that is equivalent to the original in the sense that theyboth have the same global optimum. The resulting problem can also be solved usingstandard nonlinear programming tools.The work hereby presented is divided in three main parts. First, an overview of stateof-the art techniques for solving cardinality and rank-constrained problems is shown.The second part of the thesis presents optimization problems with cardinality constraintsin the eld of model selection, parameter estimation and optimal control.The third part of the thesis addresses a rank-constrained optimization problem whendesigning a low-order controller with prescribed degree of stability. The formulation ofthis problem includes LMI and rank constraints.