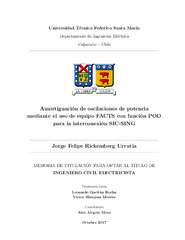 This study introduces a methodology to evaluate and select a FACTS device with POD control function in orderto avoid the power oscillation damping of the future SIC-SING interconnection. For this issue, a small signalstability analysis is carried out for the system resulting in the existence of inter-area modes. In more than halfof those scenarios, the inter-area mode (SING-SIC mode) had a lower damping level. The grid code determinesthat the damping level of electromechanical oscillations in steady state (N network) must be equal or greaterthan 10 %.The most critical scenario identi ed for the year 2018 is the one with transfers from SING to SIC in highdemand, dry hydrology, no solar and wind generation condition resulting in a mode with a damping level of3.3 %. In order to improve this scenario, the usage of a shunt FACTS device is proposed. Considering a capacityof 150 [MVar], a STATCOM presents a better performance in the power oscillation damping than a SVC,which adds a better performance in dynamic voltage control with a similar investment cost.Although a FACTS device is included in the study, there are some critical cases with damping level lower than10 %; therefore, the POD function is incorporated into the STATCOM. The tuning of the control parametersis accomplished based on the residual method. This method provides the best location for the FACTS deviceas well, which results in Los Changos 220 [kV] substation.With the POD function adjusted, the inter-area modes improve signi cantly their damping level with theexception of two scenarios. To ensure the satisfactory damping of all SING-SIC modes, it is also proposedthe PSS adjustment of the following units: U16, CTM2, CTM3- TG, CTM3-TV and U14. By adjusting thePSS in conjunction with the POD function, it is possible to damp successfully the inter-area modes, which iscorroborated with dynamic simulations of the system. Considering the following stages of the interconnectionand future works, an analysis of the system is carried out for 2021 and 2024. A new setting of the controlparameters for the POD function allows the proper damping of these modes.Considering both the adjustment of the POD function for the STATCOM located in Los Changos 220 [kV] aswell as the tuning of the PSS parameters for the power generation units actions, it is possible to damp all theinter-area oscillation modes in the power system reaching the level allowed by the Chilean grid code.VII