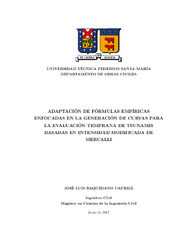 In recent years, Chile has been exposed to an important number of strong earthquakes that havetriggered tsunamis of different amplitudes and extension. Notable examples include the Maule earthquake(Mw 8.8), which took place on February 27th, 2010; the Iquique earthquake (Mw 8.2), on April1st, 2014; and the Illapel earthquake (Mw 8.3), on September 16th, 2015. These events permittedthe identification of some weaknesses of the then existing Chilean Tsunami Warning System, and thecreation of an improvement strategy that has been implemented recently, which corresponds to theIntegrated System of Tsunami Predicion and Alert (SIPAT, in Spanish). Despite these improvements,there is still some uncertainty regarding to the exact area potentially affected by a tsunami immediately,and more importantly, a finite time before solutions are found. These difficulties are mainlydue to the time restraints of the way the information flows between the three entities in charge of theevaluation (ONEMI, CSN and SHOA), and the time required to process the data. Hence the necessityof a supplementary evaluation method that helps define the evacuation area.In this work, an analysis of the potential relation between the intensity of an earthquake (via theModified Mercalli Intensity, MMI) and the occurrence of a tsunami and its expected wave amplitudeis performed, taking into account the distance from the point of interest to the hypocenter and theearthquake magnitude. Thus, the objective is to test whether the Mercalli Intensity Scale can be usedas a tool to support the existing system from a technical point of view, during the period when noother technical assessment is available.First, a series of empirical formulae relating the intensity with either Peak Ground Accelerationor Peak Ground Velocity, and others that relate PGA or PGV with the parameters that define theearthquake (e.g. depth, magnitude, dip, strike, among others) are tested and calibrated. To performthis, data available from earthquakes occurred between 2011 and 2014 are used. In order to validateour scheme, additional data from 2015 earthquakes are utilized. The result is an empirical relationshipbetween MMI, hypocentral distance and earthquake magnitude.Next, to obtain the corresponding tsunami hazard, numerical simulations of a range of scenariosare performed to ensure data coverage and statistical robustness. Here, a series of points of interestlocated around nine coastal cities are considered to create city-specific charts which relate tsunamihazard with magnitude and hypocentral distance. A city-specific approach is used under the premisethat a tsunami would vary greatly in different locations, even under the same source conditions, dueto bathymetric and topographic controls.Through the completion of the aforementioned steps, an additional way to evaluate the risk of atsunami after a considerably large seismic event is available for use and, in consequence, the currentevaluation system is reinforced, improving the preparation and response times against an eventual emergency.